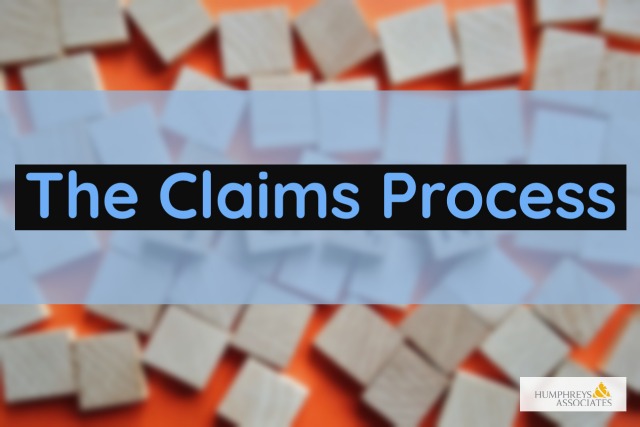 An SWO is a temporary suspension of work enabling the customer to re-evaluate the contracted work.

The customer has a number of reasons to issue a Stop Work Order:

A Stop Work Order could affect the entire contract or could be focused on a specific deliverable item, component, or function. A key concept of Stop Work Orders is that they are temporary. The Federal Acquisition Regulations (FAR) envision that Stop Work Orders are resolved within 90 days but allow that the timeframe can be different subject to customer and contractor agreement. The resolution of a Stop Work Order could result in a revised work scope approach (technical, schedule, and/or cost) or possibly the cancellation of the contract.

With respect to a Stop Work Order (SWO), a contractor may file a legal Claim and/ or make a Request For Equitable Adjustment (REA) to cover the impacts of the SWO.

While the Claims and REA processes are not typically considered part of Earned Value Management (EVM), they certainly occur simultaneously with EVM actions, and are critical to a contractor’s administration of the contract. Asserting the right to submit a Claim or REA for a Stop Work Order must be timely, and appropriate supporting data must be generated for both actions to ensure the contractor receives fair consideration for the customer’s interruption of contract execution.

A Claim vs. a Request for Equitable Adjustment (REA)

Even though some people often use the terms interchangeably, it is important to know that they are two different actions, and that either or both can be filed as a result of a Stop Work Order (SWO).

What is a Claim?

Per FAR 2.101, a claim is a “written assertion by one of the contracting parties seeking, as a matter of right, the payment of money in a sum certain, the adjustment or interpretation of contract terms, or other relief arising under or relating to the contract.”

When the customer issues a Stop Work Order, this action prevents the contractor from performing activities that fulfill contract requirements (e.g., meeting a delivery milestone, etc.) and may well cause the contractor to incur costs that would not have occurred had the Stop Work Order not been instituted. In Part 2 of this article on SWOs we addressed some of the typical costs that might be cited in a Claim. Those are cited here, along with a couple others:

A Claim is the vehicle to provide specific monetary compensation (payment of money) to the contractor for those incurred costs. A Claim is a legal action (i.e., a dispute covered under the Contract Disputes Act) that requires a prompt response from the government (usually 60 days).  Unlike a REA, a Claim is a legal action in which the contractor must prove monetary damage caused by the SWO action.  There is no proposal to the customer for a Claim, but the contractor must be able to show evidence to substantiate their Claim of a monetary impact.

What is a Request for Equitable Adjustment (REA)?

Per FAR 52.242-15 “The Contracting Officer shall make an equitable adjustment in the delivery schedule or contract price, or both, and the contract shall be modified, in writing, accordingly, if— … (2) The Contractor asserts its right to the adjustment within 30 days after the end of the period of work stoppage; …”

An REA seeks contractual relief for schedule and/ or contract price (and thus budgets) that were impacted by the SWO, for example:

The contractor typically has 30 days following the SWO decision to assert its right to submit a REA to the contracting officer.   As evidenced in the name, the REA is a “request” to the Government to adjust the schedule and/ or the contract price driven by the SWO action.  This “request” is in the form of a proposal to the government identifying those schedule and cost/ price impacts. The word “equitable” (in REA) also means that the adjustment should be fair to both sides, so in theory, an REA is typically a collaborative effort between the contractor and the customer.

Unlike a Claim, however, the government has no deadline to respond to the REA, meaning that the negotiations for an REA could drag on for months (or longer).  A contractor may decide at any time to convert the REA to a formal Claim (usually if the government doesn’t respond to the REA or if the negotiations on the REA breakdown).  If this conversion is made, the contractor’s Claim may not be allowed to include the “Contract Administration Costs” allowed under the REA (see above list).   A Claim, on the other hand cannot be converted to a REA.  If a Claim is denied, or the contractor is not satisfied with the government’s decision, the contractor can present its case to a board of contract appeals or to the U.S. Federal Claims Court.

How do SWO-related REAs and Claims Get Started?

When a Stop Work Order is issued, the contractor follows EVM procedures to stop the affected work and move budgets from affected control accounts to Undistributed Budget to await the final SWO decision.

When are Claims and proposals for REAs submitted and how do they impact EVMS?

REA: Every effort should be made to submit the REA proposal within the 30 days after the work stoppage ends. If this is not possible, at the very least, notify the customer’s contracting officer in writing that your company asserts its right to submit the REA and provide a target date for the REA proposal submission.  The intersection of an REA with the EVM System is in the fact that the schedule and cost terms of the contract are being modified. These changes would alter the Performance Measurement Baseline (PMB), the total budget, and the planned end date of the contract.

Claim: A Claim may be submitted by the contractor as soon as they have collected all the unique costs incurred as a result of the SWO action, which can include Claims and/or REAs filed by subcontractors and vendors.  Formal filing of the Claim initiates the 60 day deadline for the government to respond. A Claim really has no intersection with EVMS since it is a request by the contractor (not the program) for reimbursement of unique expenditures, paid by the contractor, that were caused by the SWO, and payment for these expenditures will not show up in the contract as ACWP. [It would make no sense to increase a contract’s ACWP with no budget identified for those expenditures – causing the appearance of an “overrun” for work that is not part of the contract.]

Regardless of the approach used, the contractor must segregate and substantiate costs for both the Stop Work Order AUW (for the REA) and “other” costs incurred as a result of the SWO (for the Claim).

The graphic below illustrates the components and timing of the steps in handling a Stop Work Order and a claim submission and asserting the right for an REA. 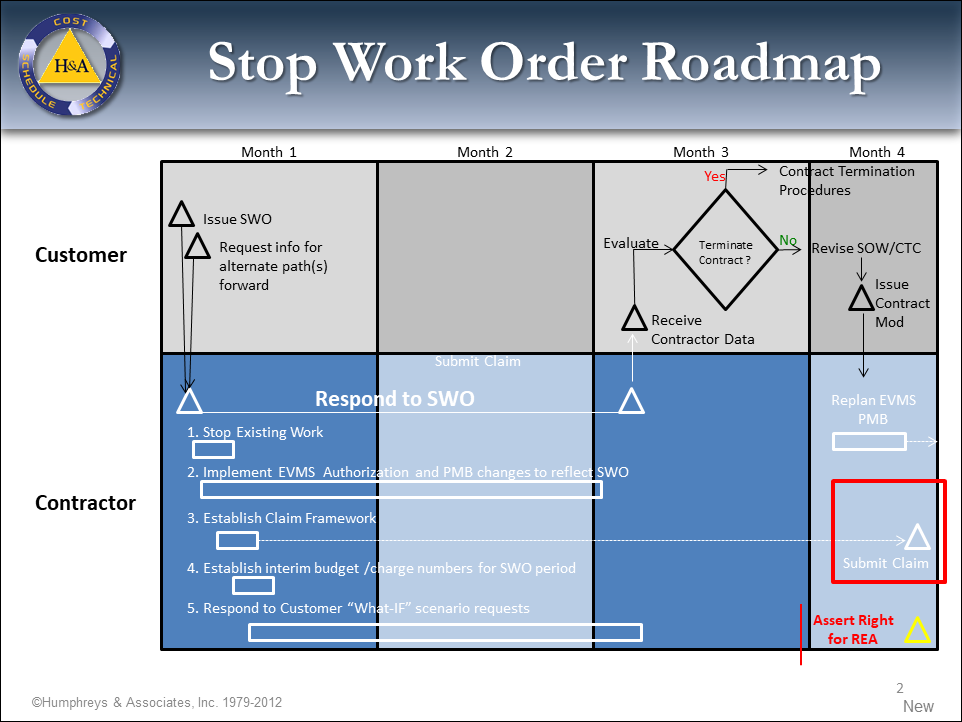