The benefit to a contractor initially developing its management system and the documentation of that management system in a System Description Document (SDD) using the Nine Process Groups is to clearly and completely structure its SDD in a natural grouping of related topics.

Below are the Nine Process Groups mapped to the EIA-748 Guidelines: 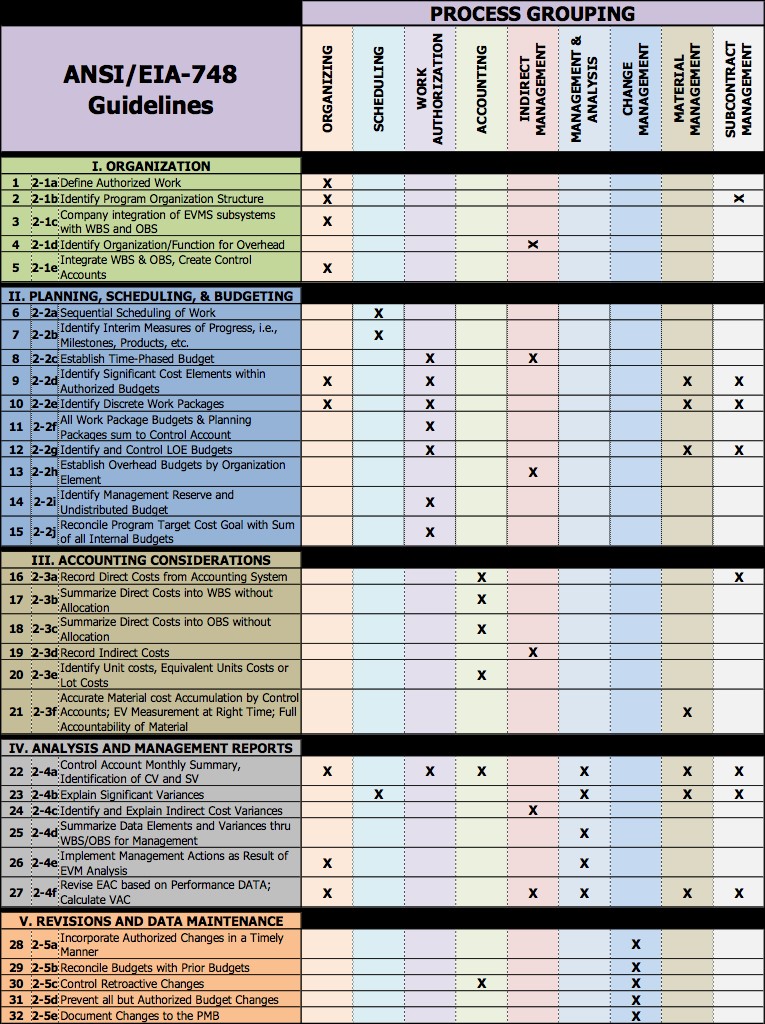 Why not use the five EVMS sections (guideline groupings) for organizing an SDD?  The 32 guidelines were chronologically organized into these five sections rather than by process.  When a program is started, the focus is to “Organize”.  This includes activities such as:

These are all activities that occur prior to the next phase “Planning, Scheduling, and Budgeting”.  This type of grouping is also an excellent method for teaching the basic concepts of EVMS.  An Earned Value course organized in this manner has a natural flow, because each one of the five guideline areas builds upon the concepts of the one before.

An SDD, however, should describe an already established system rather than a concept, and the best framework in which to understand that system is not with a chronological orientation.  Using the five EVMS areas approach often results in a document that is muddled, with disjointed flows of information.  For example the topic of Indirect Cost Management is covered in six different guidelines across four different guideline areas.  Similarly, Subcontract Management is represented in eight guidelines across four guideline areas.  An SDD using the structure of the five EVMS areas would need repeated coverage of these topics throughout.  Many companies also have organizational disciplines represented by several of the nine process groupings, e.g., Subcontract Management, Material Management, Indirect Management, and Accounting are often organizations within the company.  Their associated processes represent the flow of the organization as well as the earned value management system.  The clearest method for designing, reviewing and documenting an earned value management “system” is to structure the system using the nine process groups.  The nine process grouping also follows the DCMA EVMS Cross Reference Checklist and its Management System Characteristics (MSCs) to accommodate contractor system structuring.

Additional chapters or section such as pre-contract award/proposal process, risk and opportunity, and system surveillance could be included in the system description, as they also involve earned value management.

In summary, while either approach could be used to construct the Earned Value Management System, the nine process group structure has proven to be the best architecture for an EVMS document.