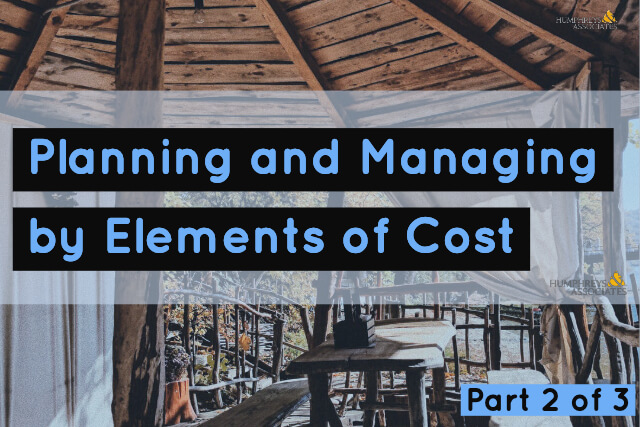 In part one of our series on Elements of Cost (EOC), we explained what EOCs are and gave an analogy of how EOCs would relate to building a patio. We also reviewed how EOCs can be “over thought” and emphasized the importance of properly applying indirect cost rates.   This post is going to be focused on the Over-Application of EOCs.

During some government reviews, the teams issued Corrective Action Requests (CARs) citing multiple examples of ACWP occurring on “zero-budgeted” Work Packages within Control Accounts.  On the surface, this sounds pretty serious, but there were several “over-applications” in play here.

For the first point we’ll look at Guideline 22 in the EVM Standard 748:

GL 22. At least on a monthly basis, generate the following information at the Control Account and other levels as necessary for management control using actual cost data from, or reconcilable with, the accounting system:

2) Comparison of the amount of the budget earned and the actual direct costs for the same work. This comparison provides the cost variance.

Even the government’s sub-question e. under GL 22 reiterates this requirement:

e. Are the following elements for measuring performance available at the levels selected for control and analysis (at a minimum at the control account level):

While the intent of the words “and other levels” and “at a minimum” was to ensure that contractors did not only perform analysis at some higher, summary level, the government’s choice of those sub-question words also opens up the application of the analysis at lower levels.  Be that as it may, the over-application still exists where it should not.  Variance Analysis is supposed to be at the CA level and rolled up to higher levels for analysis.  The bottom line for each of the CARs written is that BCWS, BCWP, and ACWP existed at the Control Account level, and the EOC visibility was available for variance analysis explanations at the lower levels in the contractors’ systems.

For the second point, let’s look at all the EVM Standard 748 Guidelines, specifically Guideline 16.

There is no Guideline that specifically requires BCWP to be claimed the exact same way BCWS was planned; however, it is intuitive that this has to be true in order for cumulative values for BCWP and BCWS to equal BAC so that the work can be considered complete.   [While the government’s sub-question b. under Guideline 22 expects BCWP to be calculated “consistent with the way the work is planned”, GL 22 itself (above) is silent on that inferred expectation.]  The Guideline 16 and its sub-question b. also require consistency of the direct costs:

GL 16. Record direct costs in a manner consistent with the budgets in a formal system controlled by the general books of account.

In the examples noted for the CAR referenced above, the work package task was a specific Element Of Cost (EOC) and was planned and completed in the same period, but no ACWP was accumulated for that specific EOC because the work was accomplished using another resource that fell into another EOC category.  When the team looked at that EOC containing the ACWP, they interpreted the finding as a “zero-budgeted Work Package” with ACWP against it. [They also cited the original Work Package itself for having BCWP with no ACWP for the element of cost that was planned and earned.]

Humphreys & Associates is available for consulting and information on this topic.  Give us a call!