Using the Same Rate for BCWS and BCWP 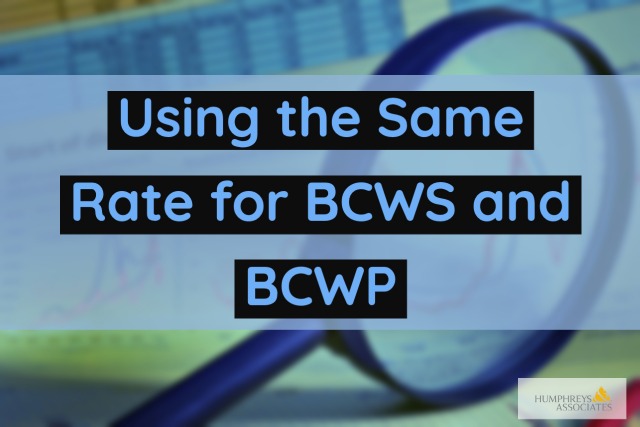 There is often an EVMS project managers debate regarding which rates to use for common budget costing EVMS data elements. For Actual Cost of Work Performed (ACWP), it is fairly obvious as the most recently approved actual rates are applied. A planning rate is generally used for BCWS and BCWP, but many in the EVM project management industry use incorrect rate application for the BCWP calculation. In some cases EVM contractors use a weighted average rate; the percent complete in hours multiplied by the dollarized BAC to derive the BCWP in dollars. This method is noncompliant with the EIA-748 Guideline 22 which states that if work is planned on a measured basis, then the BCWP must be calculated on a measured basis using the same rates and values. In other words, the rate and methods used to calculate BCWS and BCWP must be the same. As shown in Example #1, it can be seen that work planned in hours (BCWS) was performed as scheduled (BCWP) each month. Each hour was planned at a rate of $100/hour until the end of the calendar year when the rate increased to $105/hour. In this example, the rates used to calculate BCWS and BCWP are the same.

Example #2 below illustrates a very common scenario. In this example work that was planned in November and December was not completed until the next year. In January, the rate increased from $100 to $105. What should the BCWP in dollars be for both January and February?

Even though the rate was escalated in the new year, the BCWP that should have been earned in the prior year is calculated using the rate that was originally planned. The same approach would be logical if the work planned at $105 per hour were performed ahead of schedule in let us say, December of the prior year. It would be earned at $105 per hour even though it was performed in a time frame where the planning rate is $100 per hour. In some instances, business systems are programmed to earn as a percent of the entire Budget at Completion (BAC). This could result in an inaccurate BCWP dollar value. As an example, let us assume 10 hours are earned in September. If those 10 hours were 1/8 of the total BAC, then the BCWP dollars associated with this 10 hours would be $102.50 per hour and the contractor would be earning too much for those 10 hours. They must earn at the planned $100 per hour! Thus the rate used for BCWP is the same as for BCWS and is compliant with Guideline 22; one earns in the same manner as they plan to earn.

In summary, EVM concepts require that in order for the work to be complete, cumulative values of BCWS and BCWP must equal the BAC.  So, from a common-sense standpoint, if BCWP is earned at a different rate than that used for planning the BCWS, the Control Account (or even the Contract) cannot be closed properly.  Examples:

Both of these scenarios violate the EVM concepts.