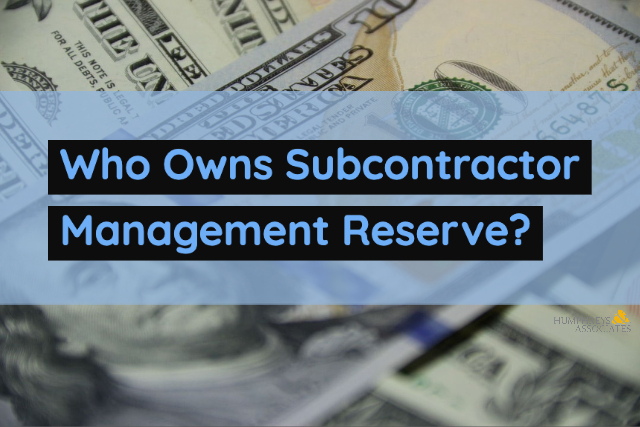 They may try to justify this by pointing out that in the DCMA Cross Reference Checklist (CRC dated 22 March 2019) Guideline # 14 Sub-question b asks:

The EVMSIG Chapter 3 Introduction (pg. 17) says this about MR:

“An allowance is made for a portion of the CBB to be withheld outside of the PMB as Management Reserve (MR) for internal management control purposes. MR is intended to provide the contractor with a budget to manage risk within the established contract scope (Guideline 14).”

As this introductory paragraph points out, MR is established by the contractor (or the subcontractor) for their internal management control purposes to have budget to manage risk within the contract scope. There is no mention of customer involvement in the decision-making process.

A more definitive statement in the EVMSIG is: “Para 3.9 (Guideline 14), Intent of Guideline” in the second paragraph – bullets and underlines have been added for emphasis:

Management Reserve (MR) is something that is allowed to provide a contractor with flexibility in handling the unknowns on a contract.  It doesn’t matter if it is a prime contractor to a government customer or a lower-tier subcontractor to a higher level (or prime) contractor.  MR is a contractor’s control mechanism and should not be subjected to any level of customer involvement.  The guidelines and implementation/ interpretation documentation try to control improper uses of MR (e.g., covering performance variances, performing out of scope work, etc.), but customers – at all levels – should not interject themselves in a contractor’s decision-making process on the use of MR. Remember also, if customers involve themselves in that process, there is a risk that their perceived “direction” to the contractor could make them complicit in poor MR decisions.